It has been a traumatic twelve months or so for the global economy with the Covid-19 pandemic wreaking havoc in more ways than one, with millions paying the ultimate price, with their lives, and millions more losing their jobs as a result of prolonged lockdowns. We are still none the wiser as to how this will all play out in the end, but the rollout of vaccines combined with huge fiscal/monetary stimulus around the world has led to some optimism about the outlook for the global economy going forward.

Indeed, the OECD’s recently issued interim Economic Outlook shows a clear improvement in growth prospects for 2021 and 2022. According to the Paris-based organisation, global output is forecast to be 2.5 per cent higher in the final quarter of 2022 than was expected as recently as last December. Aside from the vaccines, the most important reason for this, is the US’s $1.9 trillion fiscal support package. This is projected to raise GDP in the world’s largest economy by almost 4 percentage points in its first full year. Its effects are also forecast to spill over to the rest of the world, raising the likes of Eurozone GDP by 0.5 percentage points. The Biden administration is also talking of a further $3trillion spending package on infrastructure, clean energy and education.

Together, these packages amount to nearly a quarter of US GDP, and while admirable, they do come with some huge risks, most notably a surge in inflation. Higher inflation will ultimately mean higher interest rates across the board. And the last thing countries need now is a big jump in interest rates given the massive debt burden overhang.

And that is certainly the case for the Irish government because its economic recovery strategy is based on borrowing as much money as it can at ultra-low rates indefinitely.

The worry is that the Government here at home is getting carried away by Ireland’s official GDP figures for 2020. The data from the Central Statistics Office showed that national output rose by 3.4 percent in real terms last year, the only country in the EU to post positive growth numbers amid the economic chaos caused by the coronavirus. Ireland’s table topping performance was, as has been well documented, driven by the strong export performance of the pharmaceutical and technology sectors.

However, on the downside, there were huge declines in output from the indigenous Arts/Entertainment, Hotels/Restaurants/Pubs and Construction sectors, with substantial job losses as a result. Of course there have been government supports to alleviate the pain but an unemployment rate of 24.8 percent in February when all claimants on the Pandemic Unemployment Payment are included is extremely worrying, and a youth unemployment rate of 56.8%, is as Roy Keane would say “shocking”. It is quite clear that the gap between the “haves” and the “have nots” has widened. The “K” recovery as they are calling it will in my view only lead to greater social unrest down the line.

Optimists will point to the latest Central Bank figures of private-sector deposits of €254bn at end-January and record household deposits of €126bn, a €14bn increase over the year as a healthy sign that consumers are flush with money, and will go on a mad spending spree when the economy reopens again as huge pent-up demand is released. But if you don’t have a job, it will be difficult to spend, and let’s face it, employment is not going back to its pre-Covid levels any time soon.  The negative impact of a prolonged lockdown is in reality going to have long-lasting consequences for many businesses and families, with the jobless rate likely to be stuck in double-digits for some time to come.

The most damning statistic though, is the huge level of government debt. According to recent figures from the European Commission, Ireland is forecast to have total government debt of €241.6bn at the end of 2021, up by almost 10 per cent on 2020. When measured on a per-person basis, this means that the individual debt burden will be €48,291 this year, the highest across the European Union and the UK. Irrespective of what the Minister for Finance says, higher taxes will be needed to reduce our borrowings, and again it will be the weaker members of the public who will bear the biggest brunt. 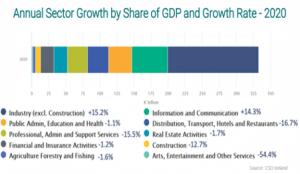 While the need for houses to be built should see a recovery in the construction sector, it is hard to be as optimistic for the arts/entertainment and tourism/leisure industries. A big problem is that key decisions on the extent of the lockdowns are being taken by public servants, whose jobs and salaries are protected, even if the Exchequer is borrowing to fund them. They have no skin in the game and as such appear to be quite happy with the status quo, and in no urgency to move things on. One wonders if they had been put on Covid-19 payments like many of their private-sector counterparts, would the economy have opened sooner. We will never know. So for now it’s more government borrowing as if there is no tomorrow. And while interest rates remain remarkably low, there was a reminder at the most recent National Treasury Management Agency (NTMA) bond auction in March that rates can up go just as easily as they can go down. The agency sold €1.5bn of benchmark Irish Government bonds as part of its plan to raise up to €20bn this year to fund the budget deficit. The two bonds in the auction, maturing in 2031 and 2050, were both sold with a small positive yield. This was in contrast to January’s massively oversubscribed €5.5bn auction of bonds at a negative yield of -0.257 percent. As such, nothing can be taken for granted.

For now, the biggest threat to interest rates remains inflation but geopolitical risks cannot be ignored. The EU’s handling of the vaccine process has left a lot to be desired and tensions within the bloc continue to mount. Many believe that the Irish economy will return to normal once the pandemic is over, but it is hard to see it myself. Covid-19 has in my opinion done more underlying damage than can be seen by the naked eye. Although the healthy state of the technology and pharmaceutical sectors provide Ireland with a strong base for recovery elsewhere, the domestic economy has taken quite a battering and may take some time to regain its feet, especially too when the impact of Brexit is taken into account. The surprise after the Global Financial Crisis was how quickly the Irish economy bounced back, the surprise this time round may be how slowly it recovers and unemployment falls.

Author: Alan McQuaid is a leading economist and media commentator in Ireland. He has worked with the Department of Finance and the leading Irish stockbroking companies.