The polls promised us a landslide victory. Instead we were left with days on the edge of our seats. After a disaster in 2016, is it time to fire the pollsters? Only if you consider a 90% strike rate bad. It’s better than I have done in many exams…

Popular vote versus the electoral college

Coming into election day, national polls gave Biden a decent 7% lead. Investors were wrong to extrapolate a “Blue Wave” – where the Democrats take the presidency and Congress – from a large lead in the national polls. The national poll itself is almost impossible to map on the electoral college, which is crucial, as we were reminded of in 2016.

Polls correct in most swing states

Polls in the swing states – which, stayed true to their “battleground” name, did pretty well. Out of the 12 swing states we identified, 11 out of 12 had the correct prediction. Only Florida was wrong, pointing to a Biden lead. Even then, the predicted margin from pollsters of 1.4% was well within the 3% margin of error, so arguably should be excused.

Pollsters got the outcome of the swing states correct, but the vote margin was where they tripped up. For example, polls suggested Biden would win Florida by 1.4%, but instead he lost by 3.3%. So the margin of error for Florida – the most important swing state –  was wrong by 4.7%.

Various states also had large errors (see chart below), more than creeping outside the supposed 3% margin of error. This error was not symmetric either; across the swing states, polls, on average polled Biden too favourably, by 3.4%. 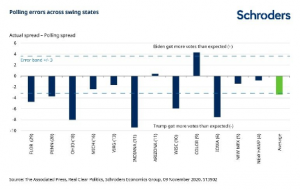 Michigan and Wisconsin – worth another 5% of the vote – would have then also flagged up as narrow races. But most importantly, the polls would still have pointed to a convincing Biden victory.

Stepping back, it seems that investors were caught off guard by the large margin of error in Florida, which was widely seen as Biden’s ticket to a quick victory on the day of the election. Instead it was the combination of the sheer number of mail votes and the order by which states and mail votes were counted, that created the real uncertainty.

Pollsters should not be fired yet

With the correct outcome for the President and a 90% hit rate in the swing states it would be unfair dismissal to fire the pollsters. But they do need to do some more work on eliminating bias, which is beginning to look more systemic than at first glance. We will put them on performance review and check-in in another four years.

Important Information: This communication is marketing material. The views and opinions contained herein are those of the author(s) on this page, and may not necessarily represent views expressed or reflected in other Schroders communications, strategies or funds. This material is intended to be for information purposes only and is not intended as promotional material in any respect. The material is not intended as an offer or solicitation for the purchase or sale of any financial instrument. It is not intended to provide and should not be relied on for accounting, legal or tax advice, or investment recommendations. Reliance should not be placed on the views and information in this document when taking individual investment and/or strategic decisions. Past performance is not a reliable indicator of future results. The value of an investment can go down as well as up and is not guaranteed. All investments involve risks including the risk of possible loss of principal. Information herein is believed to be reliable but Schroders does not warrant its completeness or accuracy. Some information quoted was obtained from external sources we consider to be reliable. No responsibility can be accepted for errors of fact obtained from third parties, and this data may change with market conditions. This does not exclude any duty or liability that Schroders has to its customers under any regulatory system. Regions/ sectors shown for illustrative purposes only and should not be viewed as a recommendation to buy/sell. The opinions in this material include some forecasted views. We believe we are basing our expectations and beliefs on reasonable assumptions within the bounds of what we currently know. However, there is no guarantee than any forecasts or opinions will be realised. These views and opinions may change.  To the extent that you are in North America, this content is issued by Schroder Investment Management North America Inc., an indirect wholly owned subsidiary of Schroders plc and SEC registered adviser providing asset management products and services to clients in the US and Canada. For all other users, this content is issued by Schroder Investment Management Limited, 1 London Wall Place, London EC2Y 5AU. Registered No. 1893220 England. Authorised and regulated by the Financial Conduct Authority.