The impact of climate change presents a systemic investment risk, making the importance of an investment’s environmental footprint more critical than ever before. The world has already experienced a rise of around 1°C in global temperatures over the preindustrial period and has started seeing the impacts of climate change in the form of extraordinary weather events, shrinking glaciers, and changing rainfall patterns.

To be successful in limiting the adverse impacts of climate change, a fundamental shift is needed in the relationship between the economy and the environment. While financial markets are well positioned to play a leading role, ultimately they will only be effective if climate change regulation is in place. However, when it comes to climate change, a mismatch exists between policy and science. Over the past year, we have seen strong momentum to close that gap—a trend we expect to continue as we lead up to the 26th United Nations Climate Change Conference (COP26) in Glasgow in November.

Net zero carbon emissions targets (net zero targets) have been established by 61% of countries, 9% of states and regions in the largest emitting countries, and 13% of cities with a population of over half a million. In aggregate, they account for just over 60% of the world’s carbon emissions.1 A focus of COP26 will be securing greater adoption of net zero targets—more countries have signaled that they will make announcements in the lead‑up to the conference.

Except for a handful of countries that were already advanced in implementing their climate agenda, direct legislation to underpin net zero targets is largely absent. While we remain in the early stages in terms of implementation, it appears that the urgency of the situation is increasingly understood. Simply put, the odds of meaningful climate regulation coming into force is very high.

Key National Commitments to Reduce Carbon in the Atmosphere 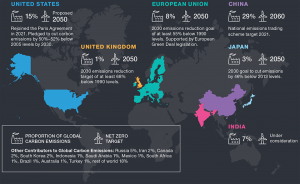 As of December 2020. Source: The International Energy Agency.

Carbon dioxide (CO2) makes up about three‑quarters of greenhouse gas emissions and is one of the more readily available environmental statistics. As such, it receives the most attention when it comes to climate change analysis. However, staying within a global temperature rise of 1.5°C will require mitigating more than just CO2. In addition to regulation focused on power generation, energy efficiency, and transportation, the task will require comprehensive regulation to mitigate methane (CH4), nitrous oxide (N2O), and fluorinated gases, as well as more sustainable land use and enhancement of carbon sinks.

To date, most of the world’s climate regulation has focused on carbon—mostly within the power sector—but that is changing. To put the potential impact of forthcoming regulation into perspective, most estimates indicate that the world’s current climate change commitments put us on a path to 2.7°–3.0°C of global warming. This is based on climate commitments made through the nationally determined contributions (NDCs) submitted by signatories of the Paris Agreement in 2015. Using a statistically based probabilistic framework, the probability of staying below 2°C warming is only 5% assuming a continuation of current trends.2 If all countries were to meet their NDCs, it rises to 26%.2 These low probabilities underpin the importance for net zero commitments.

While markets have anticipated some climate legislation coming into force, namely in select sectors directly impacted by energy transition, we do not see widespread evidence of dislocation in valuations across the broader economy. As new rules come into effect around the world, we expect that performance around climate issues will become increasingly more important to investment performance. Interestingly, we see a bifurcation in corporate approaches to climate change across all sectors of the economy.

As legislative initiatives start to directly impact financial performance, we believe the differentiation between winners and losers will become evident (and potentially quite quickly). Of course, regulation is not the only factor moving the needle on how issuers are responding to climate change. Other important factors are innovation and consumer preferences.

On the innovation front, new advances have driven down costs in renewable power, which has sped up deployment of renewable capacity. The International Renewable Energy Agency estimates that the 3.2 terawatts implied in current NDC power targets for 2030 should be met as soon as 2022. On the consumer preferences front, we see companies adding environmental labeling to products as well as increasing demand for more sustainable products such as meat alternatives.

Climate change is increasingly a major concern for global communities, companies, our clients, and our investment teams. The focus on how companies are working to mitigate the risks to their activities is only set to intensify, and COP26 and regulatory efforts will bring the issue further into the spotlight.