Epochenjahr is one of those wonderful German words describing a concept in a single word. In detail, it refers to a year when one era ends and another begins, usually referring to watershed moments such as 1789 or 1918. As investors, we should consider whether 2016 marks the end of globalisation as we know it, as the election of Donald Trump and the Brexit vote inaugurated an era of deconstructing the global trading order. The reversal of globalisation – in effect, de-globalisation – is a process that would gradually constrain the flow of capital, goods, labour as well as data.

It is critical to recognise that there are three interconnected forces at play: first, the failure of developed economies to maintain post-war economic growth rates post-2000; second, the inability to manage the distributional effects of globalisation’s winners and losers; and third, the distortional nature of China’s political economy within the global architecture. Together, these forces have undermined public support for globalisation in advanced economies, leading to policy outcomes that exacerbate the stress points and therefore further the push for de-globalisation. In short, unless there is a structural turnaround in the three factors above, current trends will become more pronounced.

From a macro perspective, de-globalisation should therefore work like globalisation in reverse, though this is unlikely to be in a perfectly symmetrical manner. Trade-dependent economies are most vulnerable, with small to middle open economies challenged to revamp their growth models.

Conversely, economies with large domestic markets or access to such a market, notably the US and China and possibly the European Union (EU), could better absorb such a regime shift. Similarly, this also applies to the funding mechanism for the respective countries, with the ability to borrow in a reserve currency or access to large capital pools becoming a disproportionate advantage as cross-border finance becomes more exposed to geopolitical volatility.

In the meantime, with the EU and China both having significant export components to their economies, structural adjustments will have to take place and these may take a considerable amount of time, if not years.

Investment Implications for the Near Term

The US dollar and US dollar-denominated assets will remain a significant mainstay for global investors.

Equity and bond indices which exclude China are more likely to outperform.  Other emerging economies such as Malaysia, Vietnam and the Philippines are benefitting from the supply chain shift away from China.

Economic pressures are building in China and it is unclear how the Chinese Government might react in terms of policy moves.  Hong Kong and Taiwan are additional pressure points.  Ongoing renminbi (RMB) devaluation is an easy policy tool, but it runs the risk of amplifying global spillovers.  China is projected to run large budget deficits by the International Monetary Fund (IMF), its overseas capital commitments are growing and foreign capital inflows have dried up.

Like all large exporters, the German economy has been badly affected by the US-China trade war.  Exports are significantly weaker and manufacturing sentiment has collapsed. The public sector budget is likely to begin moving into deficit from surplus, making Germany a net issuer again.  Investors should think of the implications of this for spreads and yield changes in the eurozone. Germany is considered to be a quasi-guarantor for the eurozone and perceived economic decline will reinforce euro weakness. A No-Deal Brexit would compound disruption in Europe.

Bottom-up analysis is important where credit and default risk is concerned. Knowledge of corporate exposures and a thorough assessment of vulnerabilities is a prerequisite for active equity investment in this environment. Together with judicious allocations of regional exposure, these should be drivers of performance for active equities.

1. De-Syncing: For the last 30 or so years, we have seen the relative performance of emerging markets (EM) versus developed markets (DM) move in cycles with the ebb and flow of risk sentiment. Over time, the amplitude of these cycles have become dimmed as their ever more connected nature has seen EM and DM move increasingly in tandem, driven by the same common forces. Will the onset of de-globalisation see these relative swings pick up again in size as these ties start to fray? 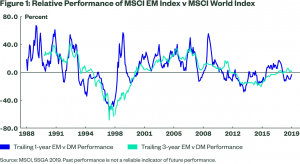 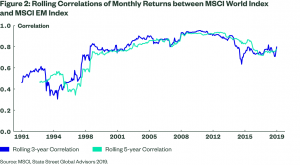 3. Rising Dispersion: Will EM country dispersion return? At the turn of the millennium, the “top-down” approach to EM investing took the view that as EM was not a homogenous bloc but a changing number of countries with their own investment idiosyncrasies, that we should partition the opportunity set on a country basis.  However, the data in Figure 3 show that the cross-sectional dispersion of EM country returns has fallen over the last 15+ years, as their equity markets have moved progressively in lockstep. Does de-globalisation herald a shift to a more fractured country-by-country investment landscape? In particular, of the two largest EM economies, India has decoupled relative to both EM and DM in the last year. China is 3.5 times the size of India’s weight in the MSCI ACWI, which would make for a significant impact should it also begin to decouple. 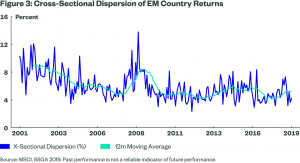 The views expressed in this material are the views of Esther Baroudy, Elliot Hentov and Altaf Kassam  and are subject to change based on market and other conditions. This document contains certain statements that may be deemed forward-looking statements. Please note that any such statements are not guarantees of any future performance and actual results or developments may differ materially from those projected.

Investing involves risk including the risk of loss of principal.

All information has been obtained from sources believed to be reliable, but its accuracy is not guaranteed.

There is no representation or warranty as to the current accuracy, reliability or completeness of, nor liability for, decisions based on such information and it should not be relied on as such.

The whole or any part of this work may not be reproduced, copied or transmitted or any of its contents disclosed to third parties without SSGA’s express written consent.

The information provided does not constitute investment advice and it should not be relied on as such. It does not take into account any investor’s particular investment objectives, strategies, tax status or investment horizon.  You should consult your tax and financial advisor.