At over 4% of GDP, the US international borrowing requirement remains significant. Many observers
attribute the imbalance to a lack of US savings but then find it hard to explain why the return on US
capital is has not risen so as to encourage higher saving domestically. In fact, the return on US capital
has fallen significantly in recent decades, having peaked in the early 1980s (Fig 1).

Given the long-run decline in real yields, we do not perceive the US international borrowing requirement as a deficiency of US savings, primarily. Instead, the problem is one of excess savings in other countries, which are then lent abroad. The idea of a global ‘savings glut’ has important implications for global investment returns and certainly fits better with the data showing a structural decline in real returns in recent decades. 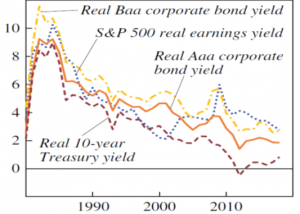 If the imbalance is the result of excess of savings globally, then what structural factors have increased the desire for savings in countries outside of the US.

First among these factors is the demographic trend in developed countries where an aging population requires higher saving to fund a looming increase in the number of retirees relative to the number of workers. A decline in the working age population also leads to higher capital/labour ratios which can stifle investment growth given that capital is already abundant relative to labour. The consequence of a high propensity for savings and a dearth of investment opportunities in many mature industrialised countries is a desire to run current account surpluses and lend abroad as a group.

Although the desire for higher savings amongst mature industrialised countries contributes to the
global savings glut, it is harder to explain the increase in savings from the late 1990s onward. Japan,
for example, saw household savings decrease over this period.

A more important source of increased global savings is likely, therefore, to have come from developing countries which have shifted from being net users to net providers of funding to international capital markets.

In the mid-1990s, Asia and Latin America were significant importers of capital which was not always
put to the most productive use. Misallocation of capital by indebted developing country governments and poorly governed banking systems resulted in overvalued exchange rates and unsustainable foreign currency debt which ultimately culminated in painful financial crises. Mexico in 1994, South-East Asia and Russia in 1998, Brazil in 1999 and Argentina in 2002 all suffered rapid capital outflows, sharp declines in asset prices, bank failures, and recession.

In the aftermath of these crises, Emerging Market governments have essentially acted as financial
intermediaries, channelling domestic savings away from local uses and into international capital
markets. The focus has been on reducing the burden of external debt via a combination of reduced
fiscal deficits and by mobilizing domestic savings to increase foreign reserves. This strategy has
pushed EM economies towards current account surplus. Despite having escaped the worst effects of
the crisis, China also built up significant foreign reserves as a buffer against future capital outflows.
For non-industrialised countries, particularly in the Middle East and Africa, sharp rises in oil prices
have also generated large current account surpluses which are lent on to international capital
markets, thereby contributing to the global savings pool.

Differing strategies around managing international capital flows were clearly highlighted with the
onset of the global pandemic in 2020. Developed Market governments responded to the Covid shock
with unprecedented fiscal and monetary expansion while these policy effects were much more
muted in Emerging Markets. In EM countries, economic growth generally bore the brunt of the Covid
shock while an escalating debt burden and rapid increases in inflation were the main outcomes in
Developed Markets.

So what does the global savings glut imply for economic policy, investment and asset pricing in the
years ahead? First and foremost, excess savings drives down the real interest rate in equilibrium
which leads to lower returns on capital. This applies to all asset classes as evidenced by the
simultaneous declines in bonds and equities throughout 2022. Traditional 60-40 portfolio remain
inherently fragile in this environment and diversification opportunities are harder to seek out and
must be actively generated through alternative investment strategies such as global macro, defined
return, volatility trading etc.

Secondly, the global savings glut implies that tackling inflation is relatively straightforward for central
banks as it is much easier to tighten monetary policy rather than to loosen it when the neutral real
interest rate moves lower. Estimates of the neutral real rate in the US, for example, are currently
about 0.5%, and close to zero or negative in Europe. In the absence of Quantitative Easing or other
unconventional measures, it is very difficult to get monetary policy on an accommodative setting i.e.
below the natural rate, particularly at low inflation rates.

In contrast, it is much easier to tighten policy with relatively modest increases in interest rates. As a
rule of thumb, restrictive monetary policy in the US, for example, only requires real rates to go higher than a TIPS yield of 0.5% approximately based on current estimates of the neutral rate. By this measure, Fed policy has been restrictive since mid-2022 having only been persistently accommodative during the Pandemic (Fig 2). Rapidly rising inflation is a recent post-Pandemic problem and there is no reason to believe that central banks are behind the curve in dealing with it. 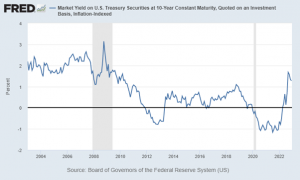 In fact, with equity markets moving well off the lows in recent months, falling bond yields and a
softening USD, financial conditions are already beginning to ease in the US. However, with labour
market conditions still tight and services sector inflation remaining sticky, it is too early for Central
Banks to change their hawkish rhetoric. However, the likelihood is that the markets are already
moving well ahead of the Fed and policy will need to catch up with aggressive easing so as to avoid
excessive disinflation or deflation in the down-leg of the growth cycle.

With public sector debt having ballooned in the aftermath of the Pandemic, deflation is a much
greater threat in our view to fiscal sustainability. In order for public sector debt levels to be
sustainable, nominal GDP growth needs to be higher than nominal interest rates. Given the scale of
public borrowing, this can only be achieved by maintaining interest rates below inflation for an
extended period and to increase the propensity to invest where possible, particularly on the supply-
side where this ample scope for increased capital spending on infrastructure and technology to
boost productivity.

Author: Don Walshe Head of Investment Strategy at Insignia Financial. To find out more talk to your financial adviser.