Disruptive innovation, now a buzzword term, has increasingly seen disruptors challenge incumbents, to create radical change over time. We predominantly look to the technology industry for its endless list of examples, but disruptive innovation in healthcare is becoming a more common theme and can lead to an entirely different dimension of value creation for this sector. Those investors identifying the trends and players which can navigate and profit from this disruption early should be able to benefit in our view.

Innovation has long been a prerequisite for success in healthcare. Products – be they drugs, devices, data or digital algorithms – all survive thanks to progress made through innovation. Although these innovations carry some risk, their incremental and continuous nature gives them a higher predictability of success and effect. Conversely, disruptive innovation can be unpredictable and often only identified looking through the rear view mirror.

Healthcare has historically been slow to embrace dramatic change. The reason is because the healthcare sector has many stakeholders, each with their own agenda: industry players, investors, public policy, consumers and politics – and some of these players have substantial power and resources.

Over the past 12 months, news headlines signal that the industry’s resistance to disruption may be at a tipping point; healthcare is on the brink of embracing disruptive innovation in a big way. In the following paragraphs, we present a sample of our predictions on the “disruptive innovations” in healthcare that lie ahead.

The advent of genomic medicine

The first personalised medicine became commercialised in the late 90’s as a breast cancer therapy. A tissue biopsy was used to classify patients into a subpopulation of HER2-positive gene carriers thereby identifying them as better responders to, in this case, Herceptin, a drug that targets the HER2 protein. By specifically blocking HER2, which promotes the growth of cancer cells, Herceptin has more than doubled the life expectancy of patients in comparison to conventional chemotherapy, displacing the standard of care of that time.

In future it is realistic to expect that doctors will be able to test for hundreds of mutations at once and select the appropriate treatment that precisely targets those mutations, regardless of where the tumour is located in the body. Cancers can be categorised by their underlying genetic causes and patients can be grouped by their ability to make effective use of highly specific compounds. This has catalysed innovation to the extent that we have already seen the first gene targets identified including RET and NKTR. Highly specific drugs have been brought to market to treat patients in a tumour tissue agnostic manner with the result of extending overall survival to still undetermined lengths. This opens the possibility of living a normal life despite having been diagnosed with cancer.

This year after decades of scientific efforts, we finally see the code cracked on a previously “undrugable” mutation: the oncogene KRAS. Sadly, cancers whose underlying cause is a mutated KRAS gene, such as pancreatic and certain forms of lung and colorectal cancers, have a very poor prognosis, making KRAS a highly desirable target given the huge unmet medical need. There are two companies working on a molecule, Mirati Therapeutics and Amgen. Strong preclinical data have generated excitement and first data in humans by mid-year are expected to provide more evidence of the promise that such a breakthrough treatment may hold for patients. On the commercial side the opportunity is substantial as it would instantly open up a 15% share of the lung cancer market with potential revenues of over USD4bn.

While each of these gene targets represents only a small percentage of many cancer types, adding these “niches” together will enable a large population to benefit from a highly differentiated and efficacious solution. To this end, the genetic profiling of each tumour will become mainstream over the coming years. Next generation sequencing (a new method for sequencing genomes at high speed and lower costs) is already becoming an established ‘standard’ of care in lung cancer.

Currently patients endure many cycles of various therapies until no hope remains. However, in the not-too-distant future, one treatment alone could be sufficiently powerful to turn cancer into a manageable disease.

Gene therapy: the risk of falling behind

Advancements in genomic science should continue to lead to disruption in the healthcare sector. Through extensive research efforts, we have developed a much better understanding of underlying genetic causes of disease over the last 20 years. Yet there remain over 7,000 genetic diseases to be remedied with only 5% currently treatable. 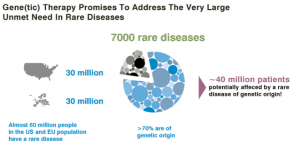 Gene therapy technologies represent a transformative treatment modality for a plethora of monogenic diseases (including, for example, cystic fibrosis). We have seen rapid progress in recent years and are now on the brink of disrupting the market by changing the way people are treated. By tapping a large market of rare diseases, with the promise of providing a one-time treatment as a cure for a disease, rather than merely addressing its symptoms, the lives of over 40 million people could be improved and the technology already exists to make this apparent ‘pipe dream’ a reality.

We expect gene therapy to displace existing chronic treatments and this has recently catalysed a large amount of corporate activity on the part of ‘Big Pharma’ companies. Pfizer, Novartis, Roche and Biogen have all made acquisitions in this space. While gene therapy does not come cheap – well over USD1 million per treatment – its price point pales in comparison with the estimated lifetime costs of USD20 million for a patient receiving chronic therapy.

Over the next three to seven years, treatment paradigms are likely to change drastically at the hands of gene therapy. And those companies sitting on the side lines are at risk of falling behind. We believe the small companies that have gene therapy technologies today will all be acquired at some point thanks to the displacing nature of this innovation. UniQure, RegenxBio, Bluebird, Biomarin and Sarepta are just a few of these small to mid-sized biotech companies that are very likely, in our view, to be absorbed in the coming years.

The future: exciting times ahead in healthcare

Disruptive structural change is creeping in from, and being pushed by, non-traditional, new entrants that have a lot to gain from the lucrative, high-margin healthcare pie. Meanwhile, across the industry, the pace of disruptive, scientific innovations – be it gene therapy or highly specific targeted drugs – is accelerating. In our view, we are on the brink of an era in which investors have the opportunity to tap into these disruptive forces and capture value generation through exponential growth like never before. The remaining challenge is to get into the game early and to identify clear winners and losers.

Christophe Eggmann is an Investment Director with GAM. To find out more about GAM talk to your financial adviser.