Amid a softening of global economic growth and an increasingly uncertain geopolitical environment, demand for fixed income has been strong, as investors seek to cushion their portfolios. However, the credit market has been a target for concern, in particular around the growth of the BBB universe – the lower end of the investment grade market – relative to higher quality credit.

What has happened to the investment grade universe and why?

This growth has had two key drivers: increased net issuance of BBB-rated bonds and increased downgrades from the A universe.

More M&A funding, particularly in the telecoms and consumer sectors, has resulted in an increase of net issuance, as companies seek funding from investors rather than from banks. Downgrades from the A universe have increased as part of a general trend post the financial crisis.

Should investors be concerned?

The investment grade universe has increased in size but it is important to note that the majority of the universe is on the higher side of the BBB scale, with approximately only 9% rated as BBB- (the closest rating to high yield). 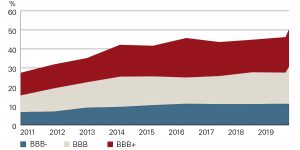 Source: Bloomberg, Vanguard. Chart is shown from 2011 as the index data was not broken down prior to this date.

A particular concern may be that an expansion in the BBB universe could mean that an increased number of issuers are now at risk of downgrade below BBB status to high-yield debt. The portion of issuers on negative watch by rating agencies may be small, but could be sizeable enough to cause a disruption in the smaller high-yield market if we move into an environment where more issuers are downgraded. However, the number of fallen angels – downgrades from BBB status to high-yield debt – has been decreasing since the financial crisis (Figure 2), as a higher proportion of the BBB universe remains closer to BBB+ than BBB-. 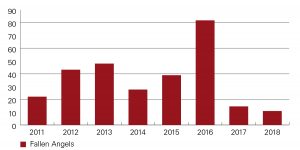 It’s important to note that much downgrade risk is sector focused. The industrials portion of the BBB universe, which makes up around 54% of the broad investment grade index2, contains the largest number of at-risk names. A similar story played out in 2015, when downgrades in the energy sector, from BBB- to high yield, were responsible for the decline in size of the BBB- market. What this tells us is that this downgrade risk is for the most part sector specific, rather than reflective of a widespread issue. Being diversified and remaining invested in a wider universe can help mitigate this risk.

Another reason for concern around BBB issuance and downgrade risk has been refinancing risk, should we move into a higher rates environment. However, debt maturity within the BBB universe is evenly distributed, with a significant portion maturing in approximately ten years, indicating that refinancing risk is manageable and very different from the leveraged-buyout-driven picture of 2008.

A more dovish tilt to the Federal Reserve’s outlook for growth has also helped to lower refinancing concerns, as we potentially move into a lower-rate environment.

How should active bond investors react?

It is important for investors to assess whether their active fixed income manager has remained faithful to their prescribed goals and not taken excessive risk to achieve returns, or added large out-of-index or out-of-asset class exposures to boost performance. Where this does happen, a fund could end up with large unintended risks, or be overly exposed to a particular sector of the market, which could be hard to manage in challenging conditions. It could also be harder for asset allocators considering these funds to manage the market risks or the factors that underpinned their original decision to invest.

In a period of increased downgrade risk, a robust approach to credit research is vital. Looking ahead, in a low-yield environment, Vanguard’s global credit team focuses on delivering long-term value through our fundamental approach to investing and deep research and stock selection through market cycles.

The value of investments, and the income from them, may fall or rise and investors may get back less than they invested. Past performance is not a reliable indicator of future results.

This material is for professional investors as defined under the MiFID II Directive only. In Switzerland for institutional investors only. Not for public distribution.

This material was produced by The Vanguard Group, Inc. This article is for educational purposes only and is not a recommendation or solicitation to buy or sell investments.

The opinions expressed in this article are those of the author and individuals quoted and may not be representative of Vanguard Asset Management, Ltd or Vanguard Investments Switzerland GmbH.