For a whole generation of investors, the notion of rapidly rising inflation belongs back in the mists of time with shoulder pads, the walkman and Glenroe! Since around the mid-1980s it has become less of a factor for investors who if anything have grown more preoccupied with its mirror image, deflation, particularly since the Global Financial Crisis. However, as inflation rates have risen this year so too have investor anxiety levels – so much so that in last month’s edition of the Bank of America Merrill Lynch global survey, investors ranked inflation as the biggest ‘tail risk’ for markets over the next year.

Looking at equity and bond markets, it’s easy to see why investors might worry about inflation. As an asset class bonds can struggle as inflation rises and eats into their interest and principal payments which generally tend to be fixed in nature.  The relationship with equities is less clear cut, however. Most of the time equity markets can handle moderate levels of inflation if the price rises are seen to be temporary and companies can pass them onto customers.

The complication for equity investors arises where prices rise significantly and flow into higher input and labour costs, both of which can erode profit margins. This can eventually feed through to equity market performance, some ripples of which we’ve already witnessed in 2021. The chart below shows annual US stock market returns (S&P 500) since 1962 where we have broken the performance down into years where inflation rates were above average (the average since 1962 was 3.8%) and below average.  We can clearly see that once inflation steps up to a higher threshold, equity markets can find the going tougher with an average annual performance of only 5.5% versus 9.7% when inflation was below average. 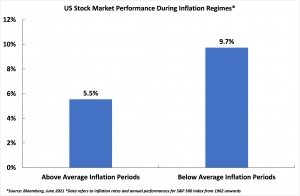 So far this year we have seen numerous examples of rising inflation in both consumer prices and factory prices. In consumer prices, headline US inflation rose to 5% in May (its highest since 2008) while the Federal Reserve’s (Fed’s) favourite gauge of core US inflation rose to 3.1% in April, the highest since 1992. Rises in commodity prices are also forcing factory prices higher as well – producer price inflation in China, the manufacturing centre of the world, hit a thirteen year high in May.

Should investors begin to worry then or is this burst of inflation “transitory” as the US Fed has suggested in recent months? Well let’s look at the evidence. In our view, it is clear that so called base effects are temporarily dragging inflation rates higher. Take oil prices for example, a key component of most global inflation baskets. Over the past year oil prices have effectively doubled from their pandemic lows so it stands to reason that this would push short term inflation rates higher. Based on our analysis oil base effects should begin to fade by the end of 2021 assuming prices stay at current levels.

This base effect finding probably explains why equity and bond markets have thus far managed to overcome any inflation jitters. In our view, in figuring out whether rising inflation is a temporary or longer lasting phenomenon, investors should watch three key developments over the next few months.

The first of these is core inflation rates – where volatile items like food and energy are deliberately stripped out. In recent months core inflation rates have also been rising, suggesting that price increases are broadening out across economies. Were this to continue this would add weight to the argument that inflation’s return could be a longer lasting trend.

The second factor is that of wages. Over the past few economic cycles wage pressures in the major economies have been well contained, helped by modest inflation rates around the world. For investors in the transitory inflation camp it is important that higher consumer price inflation doesn’t lead to persistent wage inflation. In the short term it is difficult to envisage a big acceleration in wage inflation considering the scale of unemployment due to the pandemic. But if the inflation genie does in fact manage to escape its incarceration, our view is it will become evident in wages sooner rather than later.

The final issue is the whole area of stimulus spending. The spending tidal wave over the past twelve months was motivated by one overriding objective – to preserve the world economy until such time as the negative impact of the pandemic had waned. Even as it recovers the US appears to be continuing down the spending road, now targeting areas such as education and infrastructure. Spending in areas like this can be invaluable for an economy, providing not only an instant growth dividend but also lifting its long-term economic potential – a big plus for a mature economy like the US. If other large economies follow suit the economic growth outlook may well improve but higher and more volatile inflation rates could also result.

What can investors do with their portfolio if they are concerned about rising inflation? In the bond space inflation linked bonds (which compensate investors for rising inflation) are an option although yields here are generally negative – not exactly a winning formula for investors’ portfolios! In public equities investors may want to tilt their portfolios to so called ‘value’ sectors of the market like energy, materials and even financials which tend to benefit disproportionately from an improvement in the economic outlook. Commodities tend to be the best hedge against rising inflation rates, however. Forestry is a commodity that offers great protection to investors against rising inflation. We’ve already seen this dynamic at play this year with lumber being one of the best performers in the commodity space as official inflation rates have climbed.

Whether the current inflationary surge is temporary or longer lasting is more likely to become clearer to investors in 2022 rather than in 2021. However, in the meantime investors shouldn’t completely dismiss the idea of higher inflation rates out of hand. It’s important to remember that central banks are actively encouraging higher inflation and that it could even be beneficial in ways, particularly insofar as it incentivises consumer spending and reduces debt burdens (which have risen substantially as a result of the pandemic). A return to the inflation rates of the 1970s or early 1980s looks very unlikely in our view, but investors could do worse than to review how much inflation protection they currently have in their portfolios just in case. At worst it will ensure they continue to preserve their long-term spending power. But it could be priceless if inflation becomes a more permanent feature of the investment landscape.