Larry Fink, the CEO of Blackrock, declared in recent weeks that the covid driven experiences of the past couple of years now mean the ‘globalisation is now dead’.  He points this out as an inevitable outcome of the supply and delivery problems that both companies and countries have experienced during this time. As regards energy and food, concerns have risen even further as a very predictable outcome of the ongoing tragedy in Ukraine.

One simple example may help illustrate the situation: (i) Russia is a major producer of fertiliser products for the world market (ii) South America is a major purchaser of Russian fertiliser products (iii) these products are used to a significant degree in the production of soya beans and other agricultural products for the animal feed industry (iv) these outputs are then supplied to North America for intensive beef production – and so we can see how the war in Ukraine could ultimately mean higher burger prices in America. The chart below shows what has been happening to global food prices in recent months. 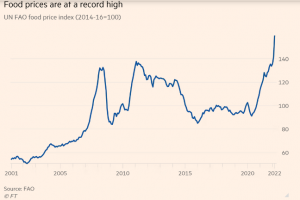 For companies, the principle of relying on a supply of parts and finished goods from halfway around the world where the supply chain can be so easily disrupted, is being seriously questioned. Governments, on the other hand are looking at energy and food and arriving at the view for security reasons that more of these essentials need to be produced closer to home. While Larry Fink’s description is certainly an exaggeration, the trend towards more use of local sourcing is inevitable and will feed into the central issue occupying markets currently – inflation.

The authorities (Central banks and Governments) are sticking to the mantra that inflation will be successfully brought under control, that economies will be stabilised and the worst outcome i.e. recession, can be avoided. The markets are not convinced.  The ‘Yield Curve’ is a chart which shows yields on bonds of different durations from 3 month to 10 year maturities. Generally, this chart is upward sloping over the length of the curve with yields rising as maturities move out. However, previous recessionary periods have been heralded by this curve tending to invert some time in advance of recession actually happening (the logic being that recession will necessitate lower interest rates in the future). The problem is that the curve has begun to invert in recent months  as can be seen in the chart below (look at how the yield on 10 year US treasuries is currently lower than 2 year maturities as shown by the red line). So markets are saying that the probability of recession has now risen to material levels and the risk is a serious concern. 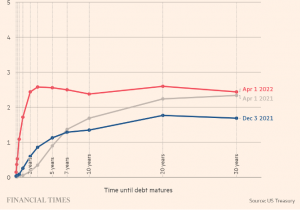 Increasing the use of local suppliers and sources will add to costs, in turn feeding through to price rises. This emerging picture strongly suggests that the notion that inflation will be a relatively short term phenomenon seems less and less likely.

There is no doubt that central banks have a significant challenge on their hands. Really the only weapon they have at their disposal to combat rising inflation is interest rates. Increasing interest rates when inflation is demand driven can be highly effective as higher rates tend to dampen demand. However, when inflation is largely supply driven as is the case currently, interest rate increases can be a very blunt weapon and in fact may well exacerbate the situation

So if we are facing a scenario of the Federal Reserve engaging in a series of interest increases , with the ECB almost certainly doing the same before the end of the year, then what should investors be doing if anything. Well the first point to note is that stock markets don’t do too badly during rising rate cycles. See chart below. 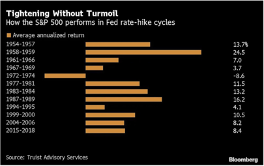 That said, there is no doubt that certain asset classes, sectors and sub-sectors do better than others. These include assets whose prices tend to follow inflation or where index-linking is a factor or companies with genuine pricing power.

No asset class or investment sector offers a guarantee of protection against inflation but some areas do at least offer an above average probability of doing better. Property has traditionally been the go to asset class in inflationary as rents tend to follow inflation and many commercial leases are index-linked. Aside from property, there are a number of other exposures which may do relatively well:

Infrastructure – apart from the fact that Governments are planning to divert significant investment to this area, this sector includes many utility companies who benefit from index linked pricing.

Renewable Energy – again this sector will benefit from the necessity to establish substantial investment programmes over the next decade. Index linked pricing for output again tends to be a feature.

Food – A growing world population, a shrinking volume of arable land and now a demand from western countries to source more food closer to home adds up to higher food prices. This is already beginning to play out (see chart above).

Healthcare – the ageing population across the globe can only mean that the demand for more and better healthcare over the coming decades is inexorable.

In conclusion, it is safe to assume that we are likely to see plenty of turmoil this year in markets as investors adjust to the new inflationary world. Investors would be well advised to review their portfolios to ensure they avoid the worst of what that may bring.