It’s only a few short years ago when the Global Financial Crisis of 2008 resulted in Irish public sector debt rising to a massive 120% of GDP, a level viewed as unsustainable by many commentators at the time. However the ensuing years saw Ireland recover more rapidly than many of its European peers and the debt to GDP ratio fell below 60% at the beginning of 2020. A growing payback from Ireland’s hugely successful FDI programme was certainly a factor in this success along with the sharp fall in international interest rates which reduced the weight of the debt burden on the economy. The arrival of Covid has interrupted and reversed this trend – to what extent remains to be seen and again will depend on a range of factors but a return to 2008 Government borrowing levels and possibly higher is a reasonable bet.

The formation of a Government in recent weeks was followed by the publication of an outline Programme for Government which sets out the aims and ambitions of the new coalition. And there is no doubt the programme is an ambitious one and contains a number of eye-catching measures including the following (in no particular order of importance):

The Green influence is very clear to see from the above and other planned measures in the Programme. Apart from their deliverability of these laudable aims, what is clear is that the Programme will entail massive spending in a period when the country is emerging from the extreme economic shock caused by Covid. This is clearly reflected in the sharp rise in borrowing shown in the chart below. Tax rises will inevitably form part of the funding solution but the majority of the spending will be funded by borrowing. 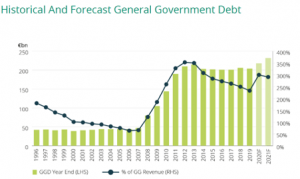 The Central Bank and others have cautiously estimated that the necessary rise in borrowing is sustainable. However, this depends firstly on tax revenues holding up but more importantly, on interest rates remaining low. Being able to borrow at 0.6% over 30 years, as the Irish Government achieved on a recent bond issue, certainly helps.

But what does all this mean, if anything, for investors? As has been the case for a very long time, the gulf between the Stock market and the real economy is a wide one, and this is particularly true of Ireland. Many indigenous sectors such as tourism, leisure and food retailing are poorly represented, if at all, on the Irish Stock Market. That said, there are a number of Irish listed companies with a very direct connection to the wider economy. This list includes the banks and the housebuilders for example. Delivering on the Programme for Government as set out could create very different growth environments for these two sectors. The Government will want to maintain and even accelerate the pace of housebuilding so we can expect continued support for this sector. On the other hand, the purchasing power of prospective house buyers could be considerably weakened for some time in the wake of Covid, possibly causing some weakness in sale prices.

For banks, the picture could be very different. At a time when banks might prefer to become a lot more conservative in their lending practices and to significantly pull in their horns, there will be considerable political and public pressure on them to loosen up their lending policies. On top of that, the regulatory pressure is unlikely to ease even to the extent of curtailing dividend payments to investors. So banks may not be the happiest shares for investors to hold for just a little while yet.

Overall, the picture that emerges for investors as a result of this array of factors – Covid, the Government and Central Bank capital support programmes, variable recovery rates for different economic sectors and regulatory pressures – is that there will be a need for investors to be highly selective in their investment choices. Related to this, we may well see a slowing of the growth in broadly based passive investing in favour of the stock picking approach. Active investing may well have its day in the sun again.