It has been a long time coming but just over eleven years to the day that the European Central Bank last raised official interest rates, it is set at its July 21 meeting to begin hiking them from an all-time low as it battles to contain the surge in inflation that has hit not just the Eurozone but the world as a whole. At its most recent meeting, in June, the ECB released updated economic forecasts for the bloc and said it expects inflation to remain “undesirably elevated for some time” and projected it to rise sharply to 6.8% on average in 2022, before falling back to 3.5% in 2023 and 2.1% in 2024, close to its 2.0% target. Its previous forecasts in March had seen consumer prices hitting 5.1% this year, 2.1% in 2023 and 1.9% in 2024. The latest published data has Euroland inflation running at 8.1% in May, an all-time high.

The first move in rates is likely to be an increase of 25bps, followed by another hike in September and the possibility of more rate-tightening before the year is out and into 2023. Indeed, the ECB left open the possibility that it would make a more drastic half-percentage point increase in September rather than the more usual quarter-point adjustment, saying that if the inflation outlook persists or deteriorates in the meantime, “a larger increment will be appropriate at the September meeting”. If the Federal Reserve and other central banks around the globe are anything to go by, there is every chance that we will see at least one half-point increase from the ECB before the year is out. 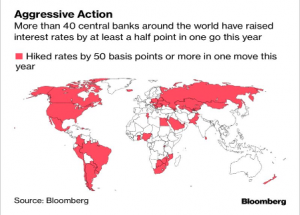 The worry for the ECB is that it may end up increasing rates more than it had to if it had started its tightening process earlier. In my view it has been too slow to act and the Governing Council has continued to allow the “doves” to dictate policy. One could argue that the ECB has a habit of getting it wrong, and in fairness to the “doves” it has been the “hawks” particularly under the presidency of Jean-Claude Trichet that have historically made the biggest mistakes. Back in July 2008, on the eve of the biggest financial crisis in living memory, the ECB did something stupid, it raised interest rates. Trichet who was president of the European Central Bank at the time was an inflation “hawk”. He worried about rising food and energy prices and saw a rate increase as a way of dampening them down. However, the move was badly-timed to say the least. The crisis was already gathering steam, European growth had slowed to a crawl, and within a couple of months, the world economy had collapsed, inflation had disappeared and the ECB was forced to slash interest rates in an attempt to avoid economic disaster.

Did the ECB learn from that experience? Far from it. Three years later in 2011, Europe was grappling with high unemployment, slow economic growth and a continuing debt crisis, with the likes of Portugal, Ireland, Italy, Greece and Spain struggling to avoid default. Given the weak underlying weak situation at the time, Trichet could have been forgiven for keeping interest rates where they were, as the Fed and Bank of England did. But instead, the European Central Bank, under his stewardship, raised rates in April and again in July (the last tightening move until now) and once more as if on cue, Eurozone economic growth stalled and the region’s debt crisis deepened, which as a result created many problems for financial markets around the world.

This time round, the “doves” on the Governing Council, in particular president Christine Lagarde and chief economist Philip Lane have until recently managed to convince their colleagues that the rise in inflation was transitory. I think everyone is agreed that supply constraint factors as a result of Covid-19 and the Russia/Ukraine conflict have been a big factor in the increase in inflation but to dismiss the importance of demand-driven factors caused by the huge fiscal stimulus implemented by governments around the world in response to the pandemic and a pent-up demand among consumers who were effectively locked away for two years and nothing to spend their money on, was simply embarrassing in my opinion. Yes, there is a real danger that higher interest rates could push the Eurozone back into recession, but the primary task of the ECB is to maintain price stability, and some would argue that it has failed miserably in this regard. In fact, one has to go back to 2013 for the last time the European Central Bank met its 2.0% target.

The worry for the ECB, as some have argued, is that If easy—even unorthodox—monetary policies failed to generate inflation at any point in the past decade or so, why should we expect tighter monetary policy to play a restraining role now? The danger is that fighting the current combination of weakening growth and soaring inflation with higher interest rates will not restore the supply-side of the world economy, especially as most governments are now tightening fiscal policies. It may be that the world economy’s problems can’t be solved by tighter monetary policies. Combatting supply bottlenecks through innovative applications of government spending and taxation may in the end turn out to be far more prudent policy options. However, tighter monetary policy may have done irreparable damage before the penny drops.

Inflation Expectations On The Rise 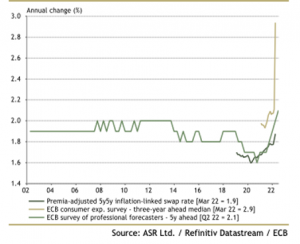 The past few ECB staff forecast updates have followed a familiar pattern: growth expectations revised lower; inflation expectations revised higher. The June meeting changes took a similar form. Despite positive GDP growth in the first quarter, the recent drop in Eurozone retail sales, weakness in consumer confidence, and contraction in manufacturing order volumes suggest a significant slowdown in growth is in the pipeline. In fact, we’ve already seen growth downgrades from the European Commission, Italian and French statistical bureaus, and the OECD in the past month. Given the severity of the household income squeeze and expected tightening of lending standards within the region, I now think a Euroland recession this year or early in 2023 is more likely than not. Furthermore, the risks of stagflation have increased significantly, and that as history shows is very hard to combat. Where the Eurozone is concerned it just seems to be one crisis after another, and mostly of its own making.

Author: Alan McQuaid is a leading economist and media commentator in Ireland. He has worked with the Department of Finance and the leading Irish stockbroking companies.