The coronavirus crisis drew into focus the question of where investors should look for safety. This once had a simple answer. Safety lay with ‘risk free’ assets, essentially the bonds issued by the G5 governments, the US, Germany, Japan, France and the UK, supported to some degree by Switzerland.

To what extent does that narrative still hold, at least in the relatively uncomplicated way that it did in the past?

The evidence seems to show that high levels of public debt, the expansion of central bank balance sheets and the persistence of low and negative yields have slowly but surely altered the characteristics of a number of core asset classes.

As things stand, Germany is the only G5 state to still have a AAA credit rating across all the major agencies, a standing it shares with Switzerland and a very few other states, none of which play a significant role in global bond markets. France and the UK are AA. Japan is A+, on a level with Chile and Lithuania. Italy, not G5 but a large developed economy, is BBB and may soon be cut to non-investment grade.

US Treasuries remain at the heart of global financial markets, despite the fact that the Federal government was downgraded to AA+ by Standard & Poor’s (S&P) in June 2011, citing concerns over the burgeoning level of public debt, which had just topped 90% of GDP1. At the end of Q1 2020, US Federal debt stood at 108% of GDP, almost exactly double where it stood at the beginning of the century, when it was 54%. The Federal Reserve balance sheet in June 2011 was $2.9 trillion. It is now $7.1 trillion, rising $3 trillion in the first half of 20202.

Germany’s Federal debt, by contrast, is a little under 60% of GDP and is being steadily paid down3. It’s reward – if that is what it is – is a persistent negative yield, -0.46% on the 10-year bund at the end of June, compared to 0.64% for the US Treasury and 0.17% for the equivalent gilt4. The difference between bunds and Treasuries has narrowed significantly during the Covid-19 crisis, but even at these more compressed levels, and given the overall lack of yield in the high grade bond market, a spread of 1.1% is a significant penalty to have to pay for a margin of perceived additional safety.

Unsurprisingly, these imbalances, they might even be called internal contradictions, play out in relative risk and return characteristics. 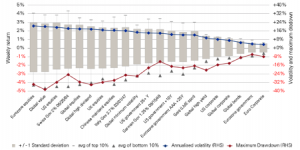 The chart shows the volatility – measured as annualised standard deviation – of various assets and asset classes from January 2017 through June 2020. Assets with the greatest volatility, shown by the blue line, are on the left, and those with the least are on the right. The red line shows the maximum drawdown for each asset type and the grey candlesticks show the dispersion of weekly returns.

The first observation is that amongst the risky asset classes, Europe’s long-dated government bonds have had similar characteristics to the main global equity markets. Issued by governments eager to lock in attractive borrowing costs far into the future and bought by investors deprived of yield, these ultra-long issues have displayed significant downside risk and volatility in recent years.

Consider Italy’s benchmark government bond, maturing in 2047. In the period 6 January 2017 to 3 July 2020, it’s annualised volatility reached 16%, approximately equivalent to a 1 in 5 probability of investors gaining or losing close to 4% on a weekly basis, a level of risk similar to that of UK equities and not far from that of Chinese A-shares.

Over a few weeks, these losses (or gains) can easily reach double-digit percentages. Italy might be a special case, given its current low credit rating, but prime-rated Swiss government bonds have not fared any better. Investors holding the Swiss government 50-year, with 44 years of remaining maturity as at end-June 2020, assume weekly price swings as large as global equities.

Looking again at 6 January 2017 to 3 July 2020, despite the volatility-dampening effects of quantitative easing (QE), we can see the disproportionate duration risk assumed by investors holding very long-dated government bonds. The Swiss government 2%, maturing in 2064, and the Italian government 2.7%, maturing in 2047, both saw maximum drawdowns of around 25% and annualised volatility of around 18.5% and 16.3% respectively. The Eurozone government AAA +25-year segment saw maximum drawdown of 18% and annualised volatility of 12.5%. As difficult as it might be to grasp, the reasonable conclusion would seem to be that Europe’s long-dated government bond market, whether low-rated Italy or prime-rated Switzerland, is anything but safe.

Similar anomalies appear to emerge across the rest of the chart. The equity indices are to the left, where we expect them to be, with higher volatility than the bonds and indices representing fixed income asset classes. It may counter expectations that long-dated governments, both Treasuries and bunds, are more volatile than global high yield, though this again might be explained by the premium on duration risk.

Negative-yielding bonds, it would seem, are transitioning to a new role, given that a buy and hold strategy all but guarantees capital destruction. Instead, in practical terms, negative yielding bonds are similar to zero-coupon bonds bought above par (nominal value) for the purpose of short-term price speculation.

The most interesting point, in our view, is at the far right of the chart. Conventionally, we expect exposure to credit to add to the volatility of a portfolio. But the chart shows that the lowest volatility over the period has been seen in a broadly diversified basket of credit investments, whether represented by global corporates, global bonds or, least volatile of all, euro-denominated corporates.

Cutting the evidence differently we see that it appears to be part of a longer-term trend.

If we expand the period back to the threshold of negative yields, to 2010, and mix the Bloomberg Barclays Euro Corporate Index with the Bloomberg Barclays Euro Government Index, we see an interesting trend. Put simply, the greater the allocation to governments, the higher the volatility per unit of return. This trend broke down in the first quarter of 2020, when the Covid-19 crisis drove investors into what was perceived as ultra-safety, but there is little reason to assume that it won’t re-emerge in due course, not least given the significant allocation to corporates in the purchasing plans published by central banks for their renewed rounds of quantitative easing.

The world has changed enormously since the global financial crisis, with investors confronted with the unpalatable choice between negative yields or expanded central bank balance sheets or high levels of state debt. For many investors, it may be time to re-consider their allocation to investment-grade corporate bonds, which offer a positive yield and, increasingly, a degree of stability for long-term investors.

The value of investments, and the income from them, may fall or rise and investors may get back less than they invested.

Past performance is not a reliable indicator of future results.