The global recovery has gotten underway, but it also promises to become increasingly uneven across regions and countries—with important investment implications. The likely divergence between the United States and Europe stands out as especially significant.

US President Joe Biden’s administration has outlined another $2.3 trillion spending package, coming fast on the heels of the $1.9 trillion stimulus approved last month—which in turn followed about $3 trillion in 2020. This represents an extraordinary amount of stimulus for an economy already set to roar back, compounded by an extremely loose monetary policy. This US stimulus looks like overkill and might well have a bigger impact on inflation than the US Federal Reserve (Fed) hopes for, but there’s no doubt that it will give a strong short-term boost to growth.

The European policy response pales by comparison and remains bedeviled by internal divisions. The European Recovery Package represents an important step toward region-wide fiscal stimulus, with €750 billion almost equally split between loans and grants. But, it’s a lot smaller than its US counterpart, and was only agreed upon after very contentious negotiations among eurozone member states.

DIVERGENCE IN THE MAGNITUDE OF FISCAL STIMULUS MEASURES BETWEEN THE UNITED STATES AND EUROPE US AND EUROPEAN COUNTRY FISCAL SPENDING (AS % OF GROSS DOMESTIC PRODUCT) 2020/2021 (COVID-19 Crisis) vs. 2009 (Global Financial Crisis) 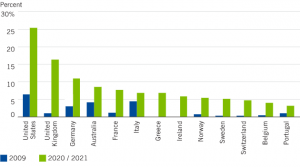 To make matters worse, Germany’s Constitutional Court has now questioned the legality of this fiscal support plan. This is not the first time that Germany’s highest court argues that key common eurozone policy programs are incompatible with the laws of its strongest member country. The Court’s objections will probably be once again overcome, but they will still fuel markets doubts on the eurozone’s economic policy strength.

Similarly, the European Central Bank (ECB) has been much less clear and decisive than the Fed in signaling to financial markets that it will maintain a very supportive monetary policy stance for the foreseeable future. Again, internal divisions within the ECB’s Governing Council play a role and could undermine market confidence.

Like the economic policy response, US vaccination efforts are proving a lot more decisive and effective than Europe’s. The United States has vaccinated over one third of its population (39.7% had received at least one dose by April 18); Europe only 18.4%.1

DISPARITIES BETWEEN US AND EUROPEAN VACCINATION CAMPAIGNS PERCENTAGE OF POPULATION WHO HAVE RECEIVED AT LEAST ONE VACCINE DOSE AND DAILY DOSES ADMINISTERED (January 1, 2021 – April 18, 2021) 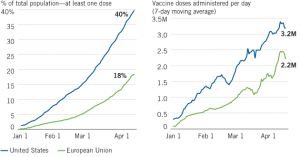 The European Union’s (EU) mishandling of the vaccination program has been especially disappointing: it was late in placing orders, slow in granting approvals, and has gotten entangled in a lengthy controversy related to the AstraZeneca vaccine, causing confusion and undermining public confidence in its safety.

As a consequence, while US states are looking at reopening their economies, EU countries have been tightening their lockdowns yet again to bring another wave of contagion under control. This will inevitably delay and weaken the EU’s recovery. Europe’s delay is further underscored by progress in the United Kingdom, which has vaccinated nearly half of its population and is also beginning to lift restrictions. 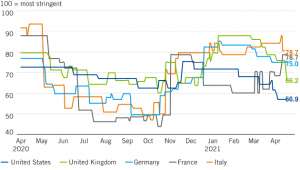 Sources: Blavatnik School of Government at the University of Oxford. As of April 12, 2021.Indexes are unmanaged and one cannot directly invest in them. They do not include fees, expenses or sales charges.

These divergences have important implications for investment strategies and risk assessments. In the short term, I see less scope for inflation to pick up in the eurozone, given the delayed and less dynamic recovery; the home-grown uplift to bond yields will be correspondingly weaker. All this makes European fixed income less exposed to duration risk than US fixed income, and more attractive at the margin; the slower normalization also suggests a cautious approach to the European corporate high yield sectors more directly exposed to COVID-19 restrictions.

The ECB’s less-convincing stance, meanwhile, flags an important tail risk. Eurozone yields will feel the pull of US Treasury (UST) yields, particularly if the latter surprise to the upside on the back of a stronger-than-anticipated US recovery. This might re-awaken concerns on higher-debt periphery countries (such as Italy) and cause the spreads of their government bonds to German Bunds to widen. Back in the bad old days of the eurozone debt crisis, then-ECB President Mario Draghi turned out to be the perfect person to meet the challenge head on. A Ph.D. economist, Draghi had both the domain expertise and the decisiveness to push the ECB to a very forceful stance, crystallized in the famous “whatever it takes” speech.

Current ECB President Christine Lagarde, by contrast, has appeared much more concerned about building consensus and lacks the economics background of her predecessor; both differences have been apparent in recent press conferences. A less-convincing, more divided ECB could find it a lot harder to allay market concerns. I don’t expect things to get as nerve-wracking as in 2012, but a bout of serious turbulence in eurozone government debt spreads is a tail risk worth monitoring.

A stronger US rebound bodes well for emerging markets (EM), especially when combined with the ongoing recovery in China and the fact that Asia overall has made significant progress in bringing infections under control and creating the conditions for normalization (with the notable exception of India’s recent surge in new cases). The upswing in commodity prices shows that the global economic outlook is brightening, although supply constraints triggered by the COVID-19 crisis have also played a role. From an investment perspective, however, we have to weigh the improved macro outlook for EM against the potential stress from higher UST yields. Indeed, both hard currency and local currency EM bonds have had a challenging start to 2021 as the reflation narrative pushed up benchmark US yields. Here, differentiation and security selection will be the name of the game. EM countries and companies better positioned to benefit from a pick-up in global trade and less exposed to currency risk on the funding side should prove to be better bets, in our view, but security selection will be key, and a successful investment strategy will require even more hard work than usual.

In this context, we also need to pay greater attention to China’s role as a direct investor and funding provider across emerging markets. Our EM team has just published a short paper that assesses China’s evolving strategy; they note that as China balances economic and geopolitical considerations in its investment decisions, and in handling distress situation for its borrowers, understanding China’s shifting priorities has become crucial for EM investors.

WHAT ARE THE RISKS?

All investments involve risks, including possible loss of principal. The value of investments can go down as well as up, and investors may not get back the full amount invested. Bond prices generally move in the opposite direction of interest rates. Thus, as prices of bonds in an investment portfolio adjust to a rise in interest rates, the value of the portfolio may decline. In general, an investor is paid a higher yield to assume a greater degree of credit risk. High-yield bonds involve a greater risk of default and price volatility than other high-quality bonds and US government bonds. High-yield bonds can experience sudden and sharp price swings which will affect the value of your investment. Changes in the financial strength of a bond issuer or in a bond’s credit rating may affect its value. Special risks are associated with foreign investing, including currency fluctuations, economic instability and political developments. Investments in emerging markets involve heightened risks related to the same factors, in addition to those associated with these markets’ smaller size, lesser liquidity and lack of established legal, political, business and social frameworks to support securities markets. To the extent a strategy focuses on particular countries, regions, industries, sectors or types of investment from time to time, it may be subject to greater risks of adverse developments in such areas of focus than a strategy that invests in a wider variety of countries, regions, industries, sectors or investments. China may be subject to considerable degrees of economic, political and social instability. Investments in securities of Chinese issuers involve risks that are specific to China, including certain legal, regulatory, political and economic risks.

This material is intended to be of general interest only and should not be construed as individual investment advice or a recommendation or solicitation to buy, sell or hold any security or to adopt any investment strategy. It does not constitute legal or tax advice.

The views expressed are those of the investment manager and the comments, opinions and analyses are rendered as at publication date and may change without notice. The information provided in this material is not intended as a complete analysis of every material fact regarding any country, region or market. All investments involve risks, including possible loss of principal.

Data from third party sources may have been used in the preparation of this material and Franklin Templeton (“FT”) has not independently verified, validated or audited such data. FT accepts no liability whatsoever for any loss arising from use of this information and reliance upon the comments opinions and analyses in the material is at the sole discretion of the user. ​

Products, services and information may not be available in all jurisdictions and are offered outside the U.S. by other FT affiliates and/or their distributors as local laws and regulation permits. Please consult your own financial professional or Franklin Templeton institutional contact for further information on availability of products and services in your jurisdiction.​