Eras are perhaps best defined by historians long after they have ended. Francis Fukuyama’s End of History was a rare exception when liberal democracy’s ascendancy – and communism’s defeat – was accurately called. In the fields of economics and markets, such predictions have a far less successful track record. In 2007, former UK Chancellor Gordon Brown infamously declared an end to the era of ‘boom and bust’ – only for a recession to follow the next year. Similarly, equity investors of a certain vintage will recall the late 1990s new paradigm of dotcom companies whose valuations bore little resemblance to non-existent earnings – until they finally did.

Today, the listed technology sector faces similar predictions of epochal demise amid two perceived threats. The first is overvaluation; the second is the possibility of breakup as antitrust authorities seek to halt monopolistic behaviour in the US and Europe. We believe neither threat has validity and that the technology sector, far from being an aggressive, ‘high octane’ investment option, in fact offers the best hope of continued growth for investors in a low demand world.

From the end of October 2009 to the end of October 2019, the S&P 500 Technology sector returned a massive 402% in total return terms, compared with 259% for the broad S&P 500 index. (Bloomberg) It is natural to believe that such outperformance will eventually end. And yet, taking the forward price/earnings ratio of both indices, the technology sector trading at around 20x is not significantly higher than the broad market at 18x. Furthermore, there is little evidence of the excesses of the late 1990s, when technology valuations reached over 50x at their peak, compared with the broad market at around 26x (Bloomberg). The failure of some of this year’s technology IPOs is also suggestive of a selectivity that was not present in the late 1990s – at least, not until it was too late.

Chart 1: On firmer ground – technology’s earnings expectations not as unhinged as late 1990s 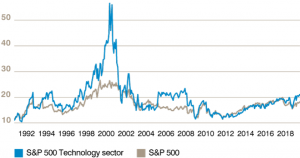 Source: Bloomberg. Past performance is not an indicator of future performance and current or future trends.

Meanwhile, investors have identified several breakup risks in the US and Europe. US presidential hopeful Elizabeth Warren has said she would consider splitting up Facebook and other technology giants. Facebook founder Mark Zuckerberg replied, “If someone’s going to threaten something that existential, you go to the mat and you fight”1.  In Europe, meanwhile, competition commissioner Margrethe Vestager has overseen fines of EUR 10 billion handed down to Google and Qualcomm for anti-competitive practices. New data laws tailored for the tech sector have also been rumoured. However, investors can, in our view, find some optimism in the breakup of AT&T and the eBay spinoff of Paypal in 2015, from which immense value was unleashed as the larger company split into its more focused constituent parts. And we believe greater competition is surely to be welcomed by investors.

With the most obvious charges against tech addressed, we can now explore the active case for this sector. Perhaps surprisingly, its foundations lie in the low growth world in which we now find ourselves. This is perhaps best articulated by Larry Summers’ theory of ‘secular stagnation’. Ageing populations in long-developed economies are causing a surplus of savings over investment opportunities which are now combining with declining world exports amid a vicious international trade war. There is no simple solution to an ageing population, barring (unpopular) immigration, while an imminent end to the current trade war is far from obvious – in a recent Democratic debate, not one candidate called for tariffs to be actively rolled back.

This paints a long-term outlook of modest growth with little inflation and accompanying low interest rates. In such an environment, growth stocks (and technology stocks in particular) typically fare better than value and cyclical sectors. This is because, like bonds of differing maturities, different equity sectors respond differently to changes in interest rates. Technology stocks, with their long-term earnings expectations, respond more positively to falling interest rates than cyclical or value stocks, with their more tangible short-term earnings flows. This phenomenon is well illustrated when simply comparing the relative performance of the S&P 500 Value index over the S&P 500 Technology sector versus the long-term interest rate. Consequently, it is our opinion that what some might perceive as an aggressive investment may offer the best defence in a low growth environment. 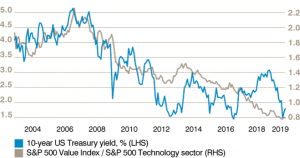 Source: Bloomberg. Past performance is not an indicator of future performance and current or future trends.

Technology can also offer a more intuitive narrative for investors, compared to many other styles. The stock market could crudely be divided into those cyclical firms in need of the economic growth ‘pie’ to grow, versus those firms which simply seek a larger slice of that pie. In our opinion, technology stocks fall firmly into the latter category, and many are insensitive to what is happening to the economy. A good example of this concept is Apple’s iPhone which, despite debuting at the outset of the global financial crisis, went on to make 2.2 billion sales (including all iOS devices). Today, firms selling software business services such as data analytics offer similar ‘agnostic growth’. We feel technology can continue to thrive not because of strong future GDP growth (itself unlikely, in our opinion), but because of profound changes within businesses across the world as they harness the raw power of data to better serve their customers. In a low growth world, this kind of independent success rightfully commands a premium.

The routes to gaining exposure to listed technology stocks are numerous. We can, however, briefly say that active security selection (or screening of stocks) carries the advantage of being able to discriminate at a granular level between technology sub-sectors, such as consumer-facing firms versus service-orientated firms in less glamorous areas like data aggregation. Other potential thematic areas include robotics and digital health. It is also worth noting that changes in S&P sector definitions last year have seen cyclically-sensitive semiconductor stocks reside in the S&P 500 Technology sector, while some of the key FAANG (Facebook, Apple, Amazon, Netflix and Google) stocks have moved to the S&P 500 Communications sector. Intriguingly, the NASDAQ index offers not only technology stocks but consumer-facing names which we believe could combine as an effective defence against de-globalisation. The options are therefore numerous and bear careful consideration. Regardless of the way in which it is accessed, we are of the opinion that technology offers a rare quality in investments – namely, growth in what has become a low growth world.

Important legal information
Source: GAM unless otherwise stated.
The information in this document is given for information purposes only and does not qualify as investment advice. Opinions and assessments contained in this document may change and reflect the point of view of GAM in the current economic environment. No liability shall be accepted for the accuracy and completeness of the information. The mentioned financial instruments are provided for illustrative purposes only and shall not be considered as a direct offering, investment recommendation or investment advice. Reference to a security is not a recommendation to buy or sell that security. Past performance is not an indicator of future performance and current or future trends.