In less than a generation, emerging markets and developing economies have gone from being producers of goods and trading hubs for developed countries, to becoming an important destination for consumer goods and services in their own right. They now account for nearly 80 percent of global economic growth, and 85 percent of growth in global consumption – more than double their share in the 1990s.[1]

China will be the new global superpower

Two centuries ago Napoléon Bonaparte said, “China is a sleeping giant… when she wakes, she will move the world.”[2]How right he was. Only 15 years ago, China’s economy was one tenth the size of the U.S. economy. If it continues to grow as predicted, it will be bigger than the U.S. economy by the late 2020s.2

As a result, and as an example of the urbanisation megatrend, China expects to have 200 cities with a population of over one million people by 2025.2 To tackle overcrowding in Beijing, China is building a new city from scratch 100km southwest of the capital. Initially it will be double the size of Manhattan and is expected to become twice the size of New York and Singapore.[3]

In 2016, Asia’s population was estimated at 4.4 billion, having quadrupled in size during the 20th century. As the graph below shows, it is forecast to grow to over 5 billion people by 2050.

Asia benefits from a wealth of resources and has an ecological variety which makes it well-placed to support this growth. As a result, we can expect to see further economic growth across this region.[4]

Traditionally investors preferred the relative safety of developed economies, and particularly the US, believing they offered longer-term sustainable growth potential. Emerging markets offered tactical opportunities that came with increased risk, but potentially greater reward. We’re already seeing a shift towards emerging markets in investment portfolios and this is likely to accelerate as China makes equities more accessible to foreign investors and improves their global trading policies.

Population growth is at the heart of the shift in economic power. The influence of emerging and developing economies will mean huge changes for business, society and the way we invest. Opportunities for investors to benefit from these rapid changes means that the small allocations to these areas of the globe in investment portfolios could swell in the coming years.

From west to east

Despite some challenges for the Chinese economy driven by debt levels and property market valuations, among other things, the potential long-term growth of the Chinese economy relative to the US and Europe looks likely. China is already on a path to usurp the US as the world’s leading superpower. When it does, political agendas, global trade and the sphere of influence are likely to shift towards Beijing from Washington.

Mandarin could become the setting language

The continuing liberalisation of the Chinese economy means the assumption that the world speaks English will likely become a thing of the past. 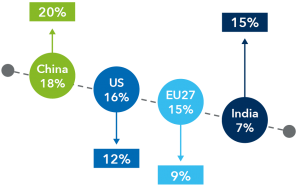 China now boasts at least 100 unicorns (private companies with a $1 billion valuation) and by the end of 2019 it is forecast to be the largest user of the international patent system. It currently lies in second behind the U.S.

An impressive six million enterprises were registered in China last year, up from 2.5m in 2013.5The fastest growing sectors included science and technology, entertainment, sport and finance, whilst the number of mining, electricity and gas companies showed a slight decline.6

This growing influence of emerging and developing economies will mean huge changes for business, society and the way we invest.

About the authors: Nicole Vettise, CAIA, Director and Product Strategist, is a member of the Natural Resources team within the Fundamental Active Equity business of BlackRock’s Active Equity Group. She is the lead product strategist for Natural Resources Equities globally, providing a link between the investment team and account managers. Rob Powell, CFA, is the lead strategist for the iShares Thematic Fund range, his role encompasses business development, product strategy and client communications.

Insights from BlackRock. BlackRock helps investors build better financial futures. As a fiduciary to our clients, we provide the investment and technology solutions they need when planning for their most important goals. As of March 31, 2018, the firm managed approximately $6.317 trillion in assets on behalf of investors worldwide. For additional information on BlackRock, please visit www.blackrock.com | Twitter: @blackrock | Blog: www.blackrockblog.com | LinkedIn: www.linkedin.com/company/blackrock

Capital at risk. The value of investments and the income from them can fall as well as rise and are not guaranteed. You may not get back the amount originally invested.

Past performance is not a reliable indicator of current or future results and should not be the sole factor of consideration when selecting a product or strategy.

Changes in the rates of exchange between currencies may cause the value of investments to diminish or increase. Fluctuation may be particularly marked in the case of a higher volatility fund and the value of an investment may fall suddenly and substantially. Levels and basis of taxation may change from time to time.

Any research in this document has been procured and may have been acted on by BlackRock for its own purpose. The results of such research are being made available only incidentally. The views expressed do not constitute investment or any other advice and are subject to change. They do not necessarily reflect the views of any company in the BlackRock Group or any part thereof and no assurances are made as to their accuracy.

This document is for information purposes only and does not constitute an offer or invitation to anyone to invest in any BlackRock funds and has not been prepared in connection with any such offer.