Perhaps somewhat ironically, as we become better connected, and the world becomes a smaller place, our populations are increasingly concentrating themselves in cities and large urban areas. This will further drive technological advancement and impact climate change, having its own influence on other megatrends.

There’s a massive migration to cities underway Globally, more people live in urban than rural areas, and as the graph below shows, that trend looks set to continue. In 1950, 30% of the world’s population lived in urban areas, and that’s forecast to increase to 66% by 2050.[1] 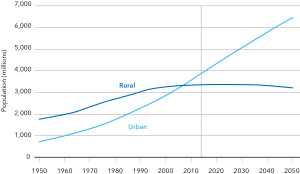 The rise of the mega city

In 1990 there were only 10 cities in the world with a population exceeding 10 millon, the so called “megacities” Today the number of worldwide megacities has nearly tripled to 28[2]

In the U.S., the patient-to-primary care physician ratio in rural areas is 39.8 physicians per 100,000 people, compared with 53.3 physicians per 100,000 in urban areas.[3] This uneven distribution of physicians has proven to have an impact on the health of the population. With better healthcare outcomes likely, urban populations consequently grow faster than rural populations organically (without migration) as people are motivated to migrate towards them.

At the same time, urban areas tend to have better employment opportunities, education and access to social and cultural activities. This makes them more attractive places to live; it is easier for businesses to flourish. In China, for example, the urban per capita income is more than double the rural figure, according to the National Bureau of Statistics.[4]

These large-scale shifts in population lead to both opportunities and challenges for society. The requirements of future urban populations will be remarkably different to the cities of today, with citizens demanding connectivity to everything – every device, every entity and every object. Wireless connectivity will be paramount to improving quality of life in cities.

Here is what else it could mean for urban life:

A lack of space and the rise of autonomous cars will mean fewer people will own a car, preferring to use ‘summon-able’ services instead.

Healthcare systems will have to change

As population density grows to unprecedented levels, existing healthcare systems will need to be radically overhauled to deal with this influx. Traditional hospitals will come under significant strain if they do not utilise new technologies available to them.

Personal security will be a focus

With higher crime rates in cities than rural areas, governments will employ elevated levels of surveillance on citizens in cities, increasing connectivity means that every activity is logged and monitored.

More than half of the world’s population now lives in towns and cities, and by 2030 this number will swell to about 5 billion. Much of this urbanisation will unfold in Africa and Asia, bringing huge social, economic and environmental transformations[5]. Cities will emerge, driven by modern urban populations that embrace technology to improve the efficiency of infrastructure and services.

About the authors: Nicole Vettise, CAIA, Director and Product Strategist, is a member of the Natural Resources team within the Fundamental Active Equity business of BlackRock’s Active Equity Group. She is the lead product strategist for Natural Resources Equities globally, providing a link between the investment team and account managers. Rob Powell, CFA, is the lead strategist for the iShares Thematic Fund range, his role encompasses business development, product strategy and client communications.

Insights from BlackRock. BlackRock helps investors build better financial futures. As a fiduciary to our clients, we provide the investment and technology solutions they need when planning for their most important goals. As of March 31, 2018, the firm managed approximately $6.317 trillion in assets on behalf of investors worldwide. For additional information on BlackRock, please visit www.blackrock.com | Twitter: @blackrock | Blog: www.blackrockblog.com | LinkedIn: www.linkedin.com/company/blackrock.

Capital at risk. The value of investments and the income from them can fall as well as rise and are not guaranteed. You may not get back the amount originally invested.

Past performance is not a reliable indicator of current or future results and should not be the sole factor of consideration when selecting a product or strategy.

Changes in the rates of exchange between currencies may cause the value of investments to diminish or increase. Fluctuation may be particularly marked in the case of a higher volatility fund and the value of an investment may fall suddenly and substantially. Levels and basis of taxation may change from time to time.

Any research in this document has been procured and may have been acted on by BlackRock for its own purpose. The results of such research are being made available only incidentally. The views expressed do not constitute investment or any other advice and are subject to change. They do not necessarily reflect the views of any company in the BlackRock Group or any part thereof and no assurances are made as to their accuracy.

This document is for information purposes only and does not constitute an offer or invitation to anyone to invest in any BlackRock funds and has not been prepared in connection with any such offer.