While the stakes of the upcoming US election are theoretically higher than usual, it should be remembered that the relationship between US politics and investment markets is not a direct one.

The US is no stranger to contradiction, but sometimes there are moments which cause observers to sit up and take notice. The late 1960s provide one such example, as civil unrest over Vietnam, race riots in cities like Detroit and a fraught election contrasted with Neil Armstrong taking the first steps on the moon. 2020 provides a sadly similar instance, with racial tensions spilling over in America’s larger cities and an election looming all while astronauts are again sent into space. Observations about the fragility of American exceptionalism aside, the key difference today is that the coronavirus has accelerated the decline of a political culture that had been getting steadily more partisan since the mid-1990s. For some investors, the situation is understandably unnerving but it should be remembered that the relationship between US politics and investment markets is not a direct one. For all the fear of redistributionist Democrats or populist Republicans, the US equity market has tended to thrive in the wake of US general elections, with very few exceptions, see Chart 1. Some of this may simply be down to relief that the campaign circus has finally come to an end in any given election year. But it may also be that the uncertainties of elections simply do not move the dial when pitted against America’s steady economic growth, dynamic innovation, world beating corporate managements and liquid stock markets. Still, 2020 tempts closer inspection by investors given the aforementioned coronavirus pandemic and the associated economic shock. The stakes are theoretically higher than usual and policy differences could really matter, particularly given the market’s relative resilience this year.

Chart 1: Recent US elections have generally been benign for US equities:

Source: Bloomberg, GAM. Past performance is not an indicator of future performance and current or future trends.

Turning to the candidates themselves, should President Trump secure another four year term it is possible that belligerence with China could escalate, that another coronavirus spike could get out of control and the fiscal deficit could become unmanageable. Regarding the latter, it is true that President Trump is no fiscal hawk. In 2008 when George W. Bush opened up the taps to bail out the banks and stimulate the US economy in the aftermath of the Lehman bankruptcy his reluctance was evident when he stated: “Eliminating risk altogether would also eliminate the innovation and productivity that drive the creation of jobs and wealth in America.” The current President has shown no such reluctance to spend, living up to his self-styled nickname as the ‘King of Debt’. The US Treasury recently declared that in the second quarter of 2020 alone it would have to borrow a staggering USD 3 trillion. While it is true that servicing costs are low and bonds are being bought outright by the Federal Reserve, doubts remain about whether the sheer scale of the borrowing can go on without consequence.

On the other hand, corporate taxation under a Trump second term would likely stay low following the administration’s centrepiece 2017 Tax Cuts and Jobs Act. This would mean large firms in the US continue to be incentivised to retain their cash reserves onshore, enabling instant penalty-free access for future investment. The technology sector has been a particular beneficiary of this and arrangement, drawing favourable comparisons to former US giant General Electric which was able to invent the television during the Great Depression precisely because it kept investing in research and development while others were laying off workers. Deregulation and supply side reform would also continue, cutting through red tape and America’s obsession with occupational licencing to create badly needed jobs in the aftermath of the coronavirus pandemic. It is an uncomfortable truth for some that Trump’s policies have benefited corporate America and the stock market, even if Main Street has been a little slower to catch up. A second term should offer a continuation of that.

On the Democrat side, fiscal irresponsibility can hardly be made out to be a relative danger given the Republican position outlined above. But corporate and capital gains tax hikes are likely in order to demonstrate a more equitable share of the tax burden in America. Environmental regulation would also be likely to increase, and costs for certain firms would rise. Life for carbon-intensive corporations could get tougher, but many investors today may have already positioned accordingly given the Paris Agreement and the recent collapse in energy prices. Perhaps most significant for markets would be the impact of a Democrat administration on the technology sector. Tech stocks – particularly the ‘Big Five’ of Facebook, Amazon, Apple, Microsoft and Alphabet – have driven the US equity market not just during the pandemic (see Chart 2) but in the years leading up to it. While the current administration was reluctant to take part in in the Organisation for Economic Co-operation and Development’s (OECD) global digital tax discussions, many Democrats are picking up signs of consumer wariness of the monopoly power of big tech. Investigations by the Federal Trade Commission and Department of Justice are likely to be given renewed vigour under a Democrat administration, while the global digital tax could be revisited in another form later. On international trade, while the likes of Elizabeth Warren are no fans of “mispriced” globalisation, it is unlikely that relations with trading partners would be as contentious as they have been under the current Trump administration. The market volatility seen in 2018-19 as a result of bitter trade rhetoric might well be avoided under a future Democrat presidency.

Chart 2: Big tech’s domination has caught the eyes of consumers and Democrats: 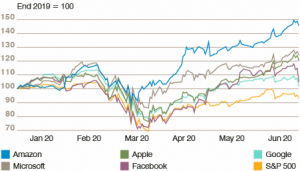 Source: Bloomberg, data as at 26 June 2020. Past performance is not an indicator of future performance and current or future trends.

All of this paints a more nuanced picture than the traditional Republican good / Democrat bad outcomes many market pundits present as an election looms. A relatively inactive Biden presidency with a Republican Senate could even create a ‘best of both worlds’ scenario in which low tax policies remain in place but the volatility-inducing Twitter pronouncements and dramas around trade and diplomacy are absent. Even the (presumed) worst case scenario of a total Democrat sweep may not be so bad on two counts: first, the US equity market has been thriving in recent months even while Biden has led Trump in the polls by some margin. This may be because, in contrast with his recently vanquished challenger from Vermont, Biden appears a relative known quantity that big business can deal with. Compare this with 2016 when Hillary Clinton’s radical statements on drug pricing in the run-up to the election frequently upset the share prices of big pharmaceutical companies. The second reason a Biden sweep may be more benign than supposed is that the ‘techlash’ may not play out as expected. Break-ups of technology firms can be additive for investors, as demonstrated when Paypal and eBay were split. Recent analysis has shown that the separate stock of Alphabet’s component firms could trade over 30% higher than the current corporate structure. And all this assumes the tech giants themselves have no say in the matter. They have generated a certain amount of public goodwill by co-operating on contact tracing apps in the fight against the pandemic, while continuing to lobby governments hard. One database showed that a certain social network had spent more than USD 5 million on lobbying in the first quarter of 2020 alone. Washington is unlikely to form its opinions in a vacuum.

Finally, there is of course the scenario of an outright Trump win. While such a prospect will doubtless prompt howls of dismay in some quarters, it would also likely ensure ‘business as usual’ for corporate America in the form of low taxes and low regulation. The 2020 US elections have been described as ‘wildcards’ and the current socio-political climate has not been so feverish since the late 1960s. But none of the possible electoral outcomes today point to imminent disaster. This election may simply not matter much for investors.

Important legal information
The information in this document is given for information purposes only and does not qualify as investment advice. Opinions and assessments contained in this document may change and reflect the point of view of the manager in the current economic environment. No liability shall be accepted for the accuracy and completeness of the information. Past performance is no indicator for the current or future development. The companies listed were selected from the universe of companies covered by the portfolio managers to assist the reader in better understanding the themes presented. The companies included are not necessarily held by any portfolio or represent any recommendations by the portfolio managers. The mentioned financial instruments are provided for illustrative purposes only and shall not be considered as a direct offering, investment recommendation or investment advice. August 2020.